Thanks for the feedback...I think

We all work for positive feedback. Its part of the feedback game that we all play. Feedback can be a good thing or hurt your store and sales.

But this is just plain weird.

A bit of background before you judge the feedback I received.
I  had these shoes listed for several months and no bites. I had no idea how much they were worth because there were only a few pair sold and the prices, colors and sizes were all over the place. So of course I started them high at $249.

I finally received an offer one morning last week. It was  for $100, less than half price. I thought I could push the envelope a little and counter offered with $125. The buyer accepted and we were off. I was able to ship that day since all of this occurred while I was trying to get sales packed and shipped. Money in the bank...soon.

The post office did its job and got them there quickly. The next day he left this feedback:

"The undertaker is coming beware. He is rising from he dead. Rest in piece"

My first thought was what the h---?

Should I be upset? Should I laugh? Should I call ebay?

In the end I decided to chalk it up to a weird guy and let it go. Six more feedback and he goes to the next page!!

Would you be upset?

Free as a Bird

I've been huffing and puffing trying to get things in order for a big Thanksgiving. I have tons of stuff to get listed and with only little ole me to do it I am not making any visible progress. At least it looks like the same to me. Big piles o'stuff.

It was a nice day on Saturday and I decided to take the bigger things I needed to photograph out on the deck. I only have twin beds that the grand princess' sleep on to spread out blankets, comforters, afghans and stuff like that and the room is light but not the right kind of light. So I keep putting off taking the pictures. Not any more. Out we go.

I had 5 granny square afghans to get photographed, an alpaca wool blanket, a quillo and a sleeping bag. Plus several baby quilts. Yikes, who buys all of this stuff? And why such big stuff?

I was snapping away when I heard a bird flying over with a distinctive screech. We have hawks and owls all the time since we live on the "backside of nowhere" but this was different. I kept trying to get a good shot but my cheap little camera did its best and that wasn't very good. 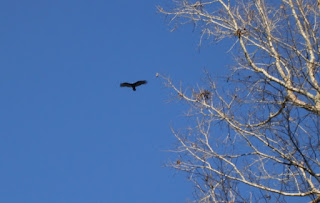 If you squint, just right, you can see the white head of this bald eagle. There were a pair of them that kept circling over the creek behind the house for a couple of hours. Several times one would fly directly over me and the house. I guess he decided I wasn't a tasty morsel and after a while they flew off.  That tree in the edge of the photo is over 120' tall and the bird is at least that much further away, probably more. So at 240' he looks that big. Glad he didn't get any closer to me but I do wish that I could have gotten a better shot of him.

UPDATE
Both the Cafe Matina and Mukka Express espresso pots from my last post sold in less than two days after listing. Both have arrived and are working great. The vintage espresso pot hasn't sold yet. The vintage train set has had 115 views and 8 watchers. I sure hope someone needs that for Christmas. It would make my friend very happy and plus I get 50% after fees.

I have been trying to list what I have and staying away from thrifts. I did go to the rescue mission thrift a couple of weeks ago and was surprised to find shoes at buy one get one half off. I stumbled up several pairs of Allen Edmonds, one black, one brown and the same size. Cost me $3.25 each. Already sold one pair for $70 and have the other left. Also recently found some Allen Edmonds York boots. First time I have found boots in that brand.

One other item I picked up at the GW outlet when I was on vacation was brass blazer buttons. I got a full set of Ralph Lauren Polo brass blazer buttons for almost free. They weigh so little that they cost about 2 cents each. Listed last week and already sold 2 jacket buttons and 1 sleeve button.
These are called Waterbury because they are made in Waterbury CT.

Also picked these from a vintage blazer, 60's-70's. monogrammed brass buttons. If I can find someone with the initials FUS or FSU I'll be all set.

Okay, enough relaxing, back to listing and cleaning.
Posted by annabel52 at 5:30 AM No comments:

Quick update on the shirt issue.

Ebay did rule in favor of the buyer. Why? I offered a refund as required and he refused because he wanted return shipping. In the end, after 4 calls to ebay to fix things, I gave him his refund for original shipping and cost of the shirt. The same as I offered to start with. He shipped the shirt back to me. No damage, other than light wear as described in the listing. No structural damage. He never did say what the problem was and I really don't think there was one. Just buyers remorse.

Now this puzzles me. He shipped a lightweight shirt (8-9oz.), originally shipped 1st class in a poly mailer, back to me in a box, about 8" x 5" x 4", with the shirt stuffed in two WallyMart bags for $7.09 priority postage. He knew he was not going to be reimbursed for postage so why did he add extra weight and ship priority? It always amazes me when a disgruntled buyer ships something back. It never fails that they package it in a strange manner or put a small item in a large flat rate box or something stupid silly. But that is OK because.....

I AM DONE WITH THE DRAMA!!!

From now on I will not let returns bother me....no matter what. Most returns are fine but there is always the occasional one that wants drama. I'm not going there. So there!! For the most part I try to respond in a timely manner, go silent when demands are put on the table, call ebay for help, and follow their instructions. But I still let an occasional buyer get under my skin. Which is OK as long as I keep it short and professional with the emails and don't feed their rant.

On to more pleasant things.

I have had a flurry of espresso items lately. Don't know why but I have found several electric espresso pots and other accessories. New carafes, filter holders, cup holders and related stuff. 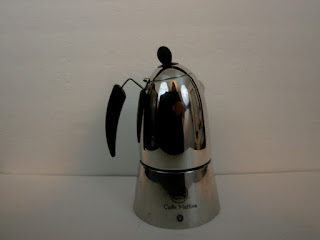 Found this never used Caffe Mattina electric espresso pot on vacation at a VV. It has an electric base that it fits on and I looked that entire store over, twice, trying to find the base with no luck. So I purchased just the pot and listed it as a replacement part. Immediately I had an interested person who decided it was priced too high. While she was "negotiating" someone else purchased for full price. I love when that happens!! and in less than 24 hours after listing!!

Also found this one locally at a ReStore. 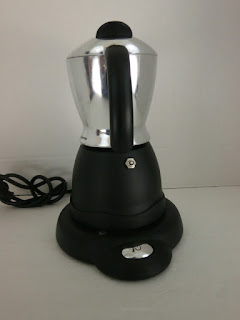 It had been at the store over a week, according to the tag, and I'm surprised it was still there. It is a Bialetti Mukka Express and works just fine.

In researching electric moka pots it seems that the "true espresso lovers" don't like the electric pots and prefer the stovetop ones. I have an electric Krups espresso maker and I don't really see the difference. It's all in the coffee to me

Found this at GW, locally. Don't think they knew what it was because it was $3 and taped together weird. 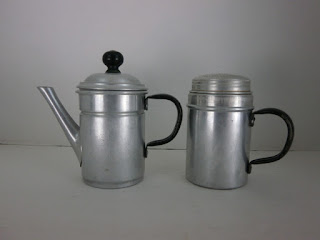 A vintage stovetop espresso pot. Remove lid, put coffee in right pot, flip upside down on left pot with water in base, put on stovetop, make espresso, remove top pot, replace lid, enjoy. Simple, right? This one says Italian Style on the bottom and has some lovely scroll work on the sides. Very nice, made in Italy.

At a local Mom&Pop greasy spoon we eat at occasionally, the owner knows I sell on ebay. I  found some items he needed online and he purchased them from me. He asked me to sell his train set online. 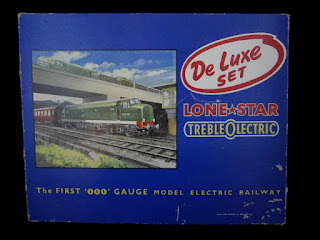 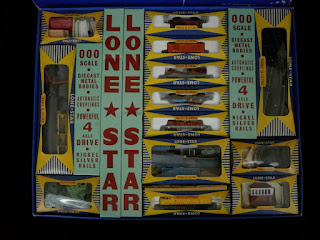 Little did I know what kind of train set he had. This is a vintage electric train set sold in the Montgomery Ward catalog in the early 60's, made in UK and is absolutely beautiful. Metal die cast cars, tiny telephone poles, trees, and in the box!!The trebel-o-lectric 000 gauge translates to an N gauge now.(I have learned a lot about electric trains recently!!) One sold recently, from an antiques dealer, on ebay for $315 on auction. I don't do auctions and I started mine higher at $499 with best offer. No offers yet and after about 50 views I have 5 watchers. Hope they are really interested in the train and not just professional watchers.

So, as always, you never know where you'll find your next treasure. Look everywhere, VV, GW, ReStore and when you go out for lunch!!!

Keep listing and hope the goblins didn't get you last night.
Posted by annabel52 at 5:30 AM 5 comments: