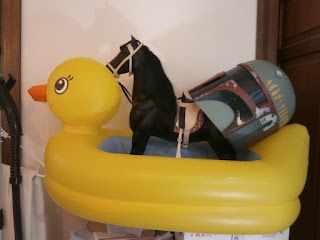 Sometimes strange things end up together in my inventory room waiting their turn in front of the camera.

I hope they weren't plotting an escape.

I've been busy trying to list all of these shoes that I have. Shoes and boots. I counted 50 and then I had at least 30 in two other totes. Our GW is loaded with boots now. Not many sandals or sneakers just tons of boots. 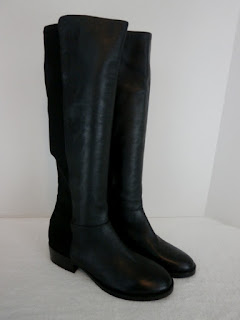 I found these in the front display case at my favorite thrift, the one with bag day and all the bins. They had them marked at $50. What? I asked to see them and saw that they were new from Saks Fifth Avenue along with a $50 price tag. I gave them back to the guy behind the counter and said "that's the closest that I will ever get to Saks Fifth Avenue". He said that they had been there for a while, since April according to the code on the sole, and would I pay $25. Hel... well maybe, what size are they? And on top of that I had a 25% off coupon!! Yahtzee!! So for $18.75 I have a nice pair of boots from Saks. More than I normally pay, but they are new with tags, from Saks and beautiful leather and since they aren't my size I won't feel guilty selling them.