Wow have I been busy this week. Moving my craft/ebay room ONE MORE TIME.....

Two years ago our daughter Smarta** moved back home. Fine, not a problem. But she chose to move the first of December. I was in school at the time. The two rooms we decided to put her in were where I had decided to move my crafting/painting stuff. These two rooms were where my Mom lived when she was with us. We gave them to Smarta** because she would have a bathroom, bedroom and sitting room.
Worked out great.....except.......

She moved right when I needed to be preparing for exams. I had to clean out my stuff and Mom's stuff from these two rooms. PRONTO!! Well you can guess what happened. Everything got thrown into boxes and hauled upstairs to my new room. When I got to the last bits and pieces, I just threw everything into a box and hauled it off up the stairs. The room was full.

Now our nephew needs a place to stay. Yep....I have to move AGAIN. Not only do I have to move but my husband had to abandon his man cave and I am taking it over as my ebay/craft room. I think it will be great but the move is killing me. I refused to just move all of the boxes back downstairs without going through them. So far I have polished off all but 3 boxes, and those will be tackled tomorrow. I have weeded out lots of things and re-donated them. I am on my second van load.

I have three piles of stuff. Donate. Sell. Save. I'm sure that the save pile will be sorted once again to really get rid of stuff. But it is a start.

The bad news is that I HAVE NO EXCUSE TO GO TO THE THRIFT STORE.

Well, when I took a load on Saturday I may have gone in......for just a few minutes!!

I had these shelves from my craft show and they are in the process of getting filled up.
Enjoy them while they are still clean 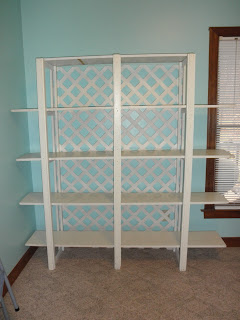 They are already being dwarfed by all of the boxes.
Posted by annabel52 at 6:00 AM No comments:

Dear Ms Goodwill Pricer,
Someone should take away your Sharpies. Or at least teach you how to use them.

I purchased a pair of high end motorcycle pants this week and the over zealous pricer not only marked the
price on the tag, but she made two price adjustments. So on this tag I have three different swirls of silver permanent marker and still have the price for all to see.

This week I also purchased some vintage women's cowboy boots. Very nice. Well, they were until you look at the soles. Why do you feel the need to put the price in bold black Sharpie on BOTH boots? They aren't priced individually are they? ? And of course the Sharpie doesn't come off with anything.

Oh and while I have your attention could you please remove that sign on the cash register that advertises the comic book that you have in the back that sells for $700 on ebay but you will let us take home for $400?

Oh, also why don't you have a bathroom? A little boy was shopping with his mother and had to go to the bathroom. The mother obviously wasn't ready to leave and told him to wait a minute. His reply was "Mommy I don't want to pee in my pants". Do you think that if you had a bathroom that mayby the mother would not have dumped all of her treasures in the ladies pants bin and run out of the store?

Yours truly,
A serious shopper
Posted by annabel52 at 6:00 AM 3 comments:

Today is the day that your local florist lives for. They can jack up the price of roses to ..... the sky is the limit or the lower atmosphere. The local retailers put out the "fresh" chocolate the day after Christmas right next to their Easter egg chocolate. Yummmmmmm

Silly old me thinks that you should express your love every day. Not on just a day when the card makers, the florist and the local retailers tell you that it's time.

Who knows how many more just plain old days there are for you and your SweetiePie. Make every day count. (No, no one is sick)

Have a tigger day... go and grab your tiger. Just make sure he isn't under the car changing the oil!! 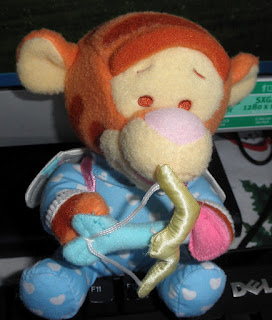 My daughter Smarta** has a novel approach to Valentines Day. Check this out.
Random Love Day http://ghostcatchronicles.wordpress.com/
Posted by annabel52 at 12:45 PM 1 comment:

Valentines Day is just around the corner and I'm in love.  Well SweetiePie already knows I love him, this is something different.

My laptop memory and hard drive is simply not large enough to hold all of the graphics I need to list on ebay. I store my pictures on a flash drive but the process of editing and downloading them to SellerSourcebook takes a lot of RAM and my laptop was driving me crazy. It sometimes took me an hour to get just two items listed. And I have about 300 things I need to get listed. At that rate it would take me until December just to list my spring and summer items. Something had to give.

My daughter offered to let me use her desktop since she very seldom uses it. She prefers her laptop. I thought about it and don't like to borrow.....if I broke it I would have to replace it.

So I bit the bullet and bought a refurbished tower only. I already had a flat screen monitor just sitting there getting dusty and a nice keyboard and a mouse. It just made sense. 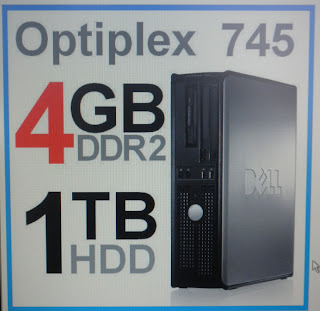 Man is it FAST
It should only take me a week or two to fill up all the memory and the hard drive. :)
Posted by annabel52 at 12:25 PM No comments:

Thank you so much for purchasing my item.

I spend a lot of my valuable time searching for just the right item to list in my store.


I put gas in my car to get to the store to purchase your item.

Sometimes I have to purchase a chocolate milk shake for my SweetiePie as a reward for being such a good shopper.


Don't you think that you could PAY FOR THE ITEM  without me sending you a gazillion messages and threatening you with a unpaid item case?

Yours truly,
I PAY MY BILLS.COM

Can you tell I have 4 buyers that have made purchases and ignore all efforts by me to collect what is due?  I HATE THAT......
Posted by annabel52 at 2:03 PM 3 comments:

I FEEL SO SAFE

As anyone who has visited my humble abode can attest, I am not the worlds best housekeeper. I find that there about 2 million other things that I had rather do than clean the house. I do clean house but no one said you had to do it willingly.

I noticed my daughters cat chasing something around the kitchen floor. I couldn't see what he was chasing. In a few minutes he laid down in the middle of the floor with his eye on this.

Never fear, Simon has his eye on it and if it acts up he will just eat it!!

THESE TURNED OUT BETTER ....

Remember the chocolate pie? Yeah, that one. 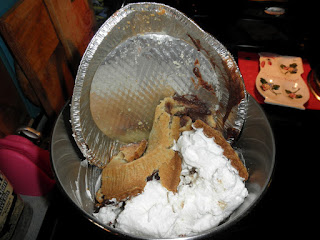 The one I scraped up from the oven door.

Now this is what PIE is supposed to look like.