I'm so proud of myself. I changed out the battery in my car and didn't have to reset all of the codes. In my current situation I'm having to learn all sorts of new things.

Last week it was how to replace a drive belt on a riding lawn mower. This week it is how to change out a dead battery without getting a hernia, those babies are heavy.

Who knows what will be on the agenda next week. Right now, I'm hoping for nothing.

I knew there was a reason I liked to go out to the wash house with my dad when I was little. For you non-Southerners a wash house is a small building where the old well was and two black iron kettles for washing were. Of course we never used the building for that. That's where my dad's workshop was. A fun place to hang out. All those interesting tools and he let me use the hammers and stuff.

As for ebay I haven't had to go shopping for quite a while. I have enough to list for at least a year. Also I haven't listed since the end of August. I took a real break the first of September and didn't try to get any listings done while I was on vacation. When I was ready to list SweetiePie needed special attention and I haven't been able to get listing worked into the schedule.

So, I am 70% down in sales from the same period last year. It is what it is, but it sure does suck. At this rate I will not even make 20K this year. I hope I can get back in the groove before the 4th quarter is over with.

But, there are more important things than money.
Posted by annabel52 at 6:00 AM No comments:

Where does the time escape to? It seems just like yesterday that it was New Year's Eve and January was off and running. I know I have been running non-stop since then. Ebay was good in January and and after that things kinda hit the old fan.

Ebay sales have been very, very, very, very s...l...o...o...o...o...w. I was on vacation Labor Day week and I put my store on vacation with date heading so everyone would know. I had 5 sales for the week and had 5 days with no sales. That is the most dry days I have ever had, ever. Since I have been back I have had 7 sales. Now, I have not had time to get anything listed yet but I have photos of 7 totes full of stuff ready to list.  While I was in Atlanta I did my shopping thing while the daughter and granddaughter did their dragon con thing. I only filled 4 Ikea blue bags with stuff on the whole vacation. That includes two trips to GW outlets on the way home. I have so much stuff that I really don't need to shop. SweetiePie was being well taken care of by his sister and daughter and it was more of a vacation for me. I slept for 8 hours in a row and didn't have to listen to Roy Boy even once!! Now that was a vacation!!

When I got home I had to deal with this, and a car with a dead battery. Dead battery, piece of cake. Lawn mower, something else. 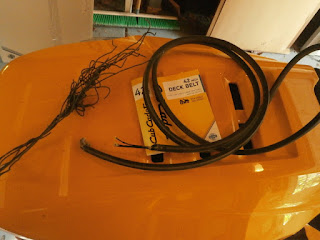 I was mowing grass at our other house, the one I'm trying to restore, and ran over a piece of wire that got wrapped around the blade spindle and I just couldn't get to it to get it off. So I loaded it up on the trailer and took it to our local lawn & garden repair shop. The nice service manager removed the wire while I was waiting and didn't charge me. I was flabbergasted when he didn't charge me anything. We have had other equipment serviced there and we need to get our chipper/shredder up and running so I will take it in and get them to fix it. I can guarantee that will not be free.

After the mower was up and running I was able to get part of the front yard mowed before another problem popped up. The drive belt broke. I don't think that the wire caused the belt to break but it could have. In any case the drive belt is just a bit more complicated to replace. After I purchased a new belt and followed the directions to remove the mowing deck I had to go back for another belt. I had the wrong one. With the right one on and everything back together, no leftover screws or parts, the mower works fine and I finished the front yard. Now the sides and back and load up the mower and take it to the other house and mow there. It never ends.

Ebay has taken a back burner but somehow they force me to work on ebay. I am still working on removing active content. I had trouble with finding where to get it done. After several calls to ebay and lots of explanation I finally got started on the active content only to be hit with non compliant listings that need to be fixed. I have 2000 listings and I have over 1800 non compliant listings. And there is no bulk fix for them. I would scream and pull my hair out if I thought it would do any good. But  I just need to bite the bullet and get it done.

SweetiePie requires more time and attention. He doesn't want me out of his sight. I always tell him where I'm going, i.e. upstairs, to the laundry room, to the garage or where ever. About 2 seconds after I start whatever I need to do, where I need to do it, he "needs" me to do something for him. Most of the time he just wants my attention and I understand. But sometimes I would really, really like to go to the bathroom without him standing outside the door saying "leave the light on" his cue for he needs to go next. We have 2 bathrooms downstairs, no waiting, but he wants to be in the  one that I'm in. After 45 years, that's not a problem. But every time? Come on, give me a break.

So, life goes on but busy, busy, busy. I'm being forced to learn new things that I depended on SweetiePie to do. I never dreamed I could replace the drive belt on a riding tractor mower. But I did.
Now every muscle in my body is screaming.