IT RAINED BUT WE STILL FOUND STUFF


It rained Saturday morning. I am glad I listened to the weatherman and slept in.

But that didn't keep us from finding stuff.

My daughter, SmartA**, has been looking for a real wood table for 6 months. She moved to her house 6 months ago and she had a very small, old table that she used in the dining room. She knew what she wanted and it took a while to find it. We went to the Habitat for Humanity ReStore yesterday for a cabinet for her studio and lookie lookie what we found.
An oak table, solid wood, and with 3 additional leaves that stretch it into a monster table. But the smaller, round size is perfect for her. The top needs refinishing and the bottom was really wobbly.
When we got it home we took all of the screws out and added some glue and toothpicks and let it dry and then reassembled the base. Perfect. Does not wobble at all.

She really liked it because it looked more Arts & Crafts than heavy Victorian. Found a date on the underside of the table, Nov 1914 made by Minnequa Furniture Co., Canton, PA and sold by National Furniture Co., Washington, DC. She already has some mismatched chairs that she plans on painting all one color and I think she might paint the base of the table to match the chairs. I think she plans on keeping the top wood.We'll see.

I'm surprised that it had been at the store for 3 days and no one picked it up.

Goes to show you, patience pays off.
Posted by annabel52 at 5:30 AM No comments:

Holy Cow was this a beautiful week end!!


Now keep in mind I just returned from a thrifting vacation and I am loaded down with tons of stuff to clean, photograph and list. Plus I am in the middle of trying to weed out the stuff that is just not going to sell. In other words, I am up to my eyeballs in STUFF.

Did that stop me from getting up at the crack of dawn and going yard sale-ing? Heck no. I was at my first yard sale at 7:10 and kept going.

There were a few here in my town and the "big city" just up the road had quite a few more. I prefer to go to the out of the way, out in the country, yard sales rather than the ones in newer sub-divisions. I don't need baby clothes or all of those useless knick-knacks that are at most yard sales. I like older stuff, mid-century modern and quality stuff.

My first sale of the day yielded only a B&D laser level, with a stuck battery. Now to figure out how to get that $%&# battery out so I can get fresh ones in.

The next stop was better. I picked up a new with tags faux leopard fur jacket, two sets of wooden boggle letters,  and a pair of girls boots. Not primo stuff, but I will make money at $5 total spent.

Next stop was hard to find. My GPS sent me 3 miles down the road and I never did find the house I was looking for. While I was backtracking I stopped at a huge sale. I only found one thing, see 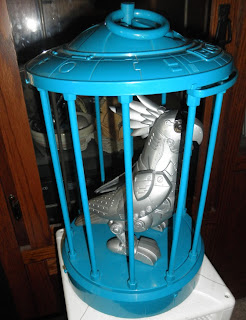 Techno Polly want a snack? The lady didn't know if it worked or not but when I got home I changed the batteries and she talks up a storm. I already downloaded the manual so I could test her. Cute and noisy but not cute enough to keep for long.

The next stop was the best of the day. It was in a barn out in the middle of nowhere in an older sub-division, that turns out was built up around this house and property. And they wanted to get rid of stuff. I got this big banana box of old, old (40-50's) camera stuff. I wanted to buy all of it so we worked out a price, $7 for the lot. I think I did good. 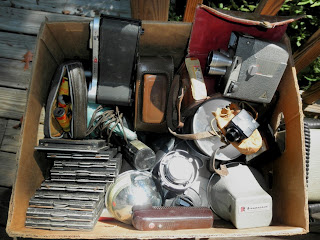 Those cut film holders stacked up on the left go for between $12-25, each. And there is also a bunch of flash stuff, including a big heavy battery pack.And six rolls of unexposed film. 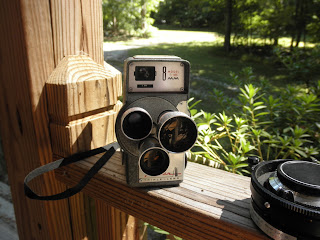 This is the first thing I picked up out of the box. Its a Sears Tower 8mm triple lens movie camera with original leather case. The leather case is really rough but the camera is super cute. I sold a vintage movie camera to a guy a while back that turns them into clocks and sells them on etsy. His clocks were really neat. 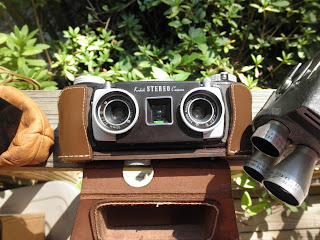 This is a Kodak Stereo Camera. I had never seen one of these and it looked neat, and it was still in original case and looked clean. 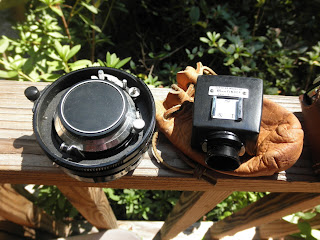 This is probably the single best thing in the box, although I didn't know it at the time. The lens on the left is a professional Mamiya-Sekor 65mm lens and the thing next to it is a 65mm finder. And they both are fantastic. I should have guessed that they were valuable since both of them were stored in leather pouches. The lens pouch was leather with velvet lining.

So I think I got my money's worth for the $20 total that I spent. And I met SweetiePie for breakfast at our favorite hangout.

All in all a good day thrifting and everything else. I hope I found more treasures than trash.

What did you find?

I PROMISE I'LL PAY ON THE 30TH

In August I listed a very ordinary white blouse.

White, long sleeves, button down, with some sparkly little appliques on the pocket and back yoke and a size 5X.
A very nice(?) lady emailed me on the 15th and asked if she purchased the item then could I wait for payment until the 30th? Hey lady, that's two weeks from now!! But I was in the middle of a very dry spell so I agreed to end the listing and reschedule for the morning of the 30th. I did tell her that I was putting my store on vacation at noon that day and if she didn't purchase early in the day I couldn't ship until the 9th. She said that was ok and I set everything up to relist on the 30th.

Shortly after I pulled the listing and rescheduled she started sending me messages. Oh....about a dozen or so. Just questions and comments and this and that. Still saying she would purchase on the 30th. Well, that was over two weeks ago and not a peep from her recently and no purchase.

I think she was just lonely and wanted something to do or look forward to or something. I really don't know. But I do know one thing, I won't be doing any similar favors for anyone else any time soon.

I hate it when someone spoils the party for everyone else.
Posted by annabel52 at 5:30 AM 2 comments:

Have you every bought anything without thinking it through completely? 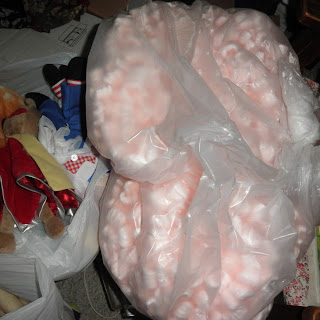 I picked them up and popped them in my cart along with all of my other treasures. Not really thinking anything other than at $1 they were a good price, a reasonable quantity  and I'm running low on packing peanuts at home.....which is currently 600 miles away....oops!! 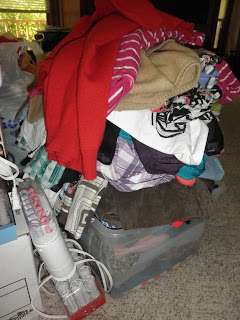 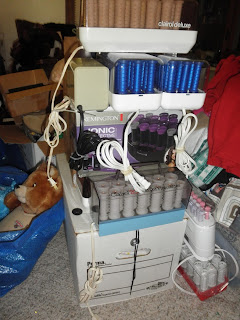 Flash forward to packing the car with all of this stuff . And I think I made a little, just a little, error in judgement.

Of course, for my FIRST  mistake error in judgement, its just a tiny one and I saved money!! but I have packing peanuts.
The first thing SmartA** said was, "why did you buy packing peanuts?" DUH...because I go through a lot of them shipping stuff!!

Hope everyone had a great Labor Day. Mine was spent on the road and thrifting.

As has been the case for the last two years (and maybe next year!) I tagged along on my daughter, SmartA**, vacation trip to Atlanta. She went to DragonCon and I went shopping.

We rented a Nissan Sentra and believe me that baby was packed to the eyeballs. They offered me an upgrade to a larger car when I picked it up and I stayed with the Nissan. Maybe I should have upgraded and I could have gotten more stuff!!! I didn't get a shot of the car before we started pulling stuff out; but the trunk was full and the backseat was almost full. See what came out of there


So, as you can imagine I am knee deep in stuff. I have a basket of kitchen stuff washed and ready to list and some of the things are dry clean so they will go for a tumble in the dryer. I will probably be washing for the next two week with just stuff from this trip.

While my SweetiePie was helping unload the car he commented on how in the world I got so much stuff in the car. I had 4 big blue IKEA bags packed with nicely folded clothes, the big box of sheets, a box with the espresso machine, the plastic tote with fragile stuff and the rest was in plastic bags and just stuffed where they fit. SmartA** had 3 blue IKEA bags with her stuff and then we had our luggage.

I think I must have put puzzles together in a former life!!!
Posted by annabel52 at 5:30 AM No comments: