HOW NOT TO TAKE A WALK

Can you tell things are boring around here. Just listing and shipping. More listing than shipping. But at least some shipping. Trying to get ready for the sales crunch that we all hope is coming. Now if ebay would just stop turning my lights off and on things would or could be better.

We must have some diversion to help pass the time. Thank you SmartA** for the entertainment this week. SmartA** is my daughter who still is living at home. She has three cats. We have lots of fur in our house.

Fearless (she's not) is a big cat. Her official job is to sleep all day and be at the door when it opens. Every time it opens. She has one goal in life. To escape.

So SmartA** decided to get her a harness and see if she would take a walk. After several days of putting the harness on inside the house and the ensuing laughter, it was time to hit the outdoors. 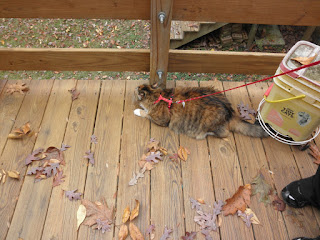 She crouched and inched forward on her stomach and just rolled around trying to get that thing off.
Had to haul her butt down the stairs because she wouldn't go on her own. Finally, in the yard. Sure hope we don't loose her in all of the leaves. 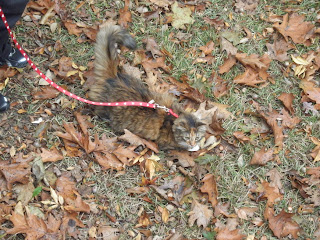 Camo cat. She finally did take two or three steps in the yard. But not very enthusiastic about the whole thing. 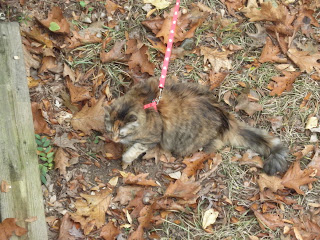 "You don't expect me to step on DIRT, do you. I will get my delicate fur dirty."
So... on to the next cat rip roaring to get outdoors. This is Firefly. And she did a little better. 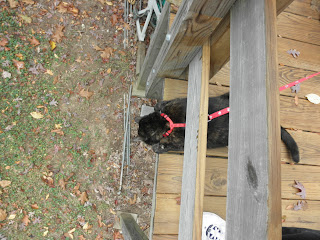 Her idea was to jump down from the deck to her freedom. The only problem is that the deck is 16' tall, and that pesky harness. "No wings....think I'll take the stairs. She did explore a bit in the yard but wanted to get under everything in sight.
Oh well, maybe next time.
Posted by annabel52 at 9:56 AM 1 comment:

It seems like they just find me. The old and weird stuff that is.

Well, I have attracted some weird people in my life, but that is a whole other story.

I didn't get to go thrifting last week because I had an overflow of stuff. A major flood. I needed to get things under control, well what passes as control around here anyway.

So this week, with 50% coupon in hand, off I go to my favorite thrift at 7am. See, the coupon is only good from 8am to 10am so you have to get there early. I was car number 2 in the parking lot on Thursday.

I hit a motherlode of high end mens dress shirts for $2 each and bought a dozen. Some more sweaters and coats and designer this and that. Score!!

I don't take time to look in the bins when I have a deadline of 10am. I check out on time and then go out to the bins. I picked up some nice t shirts for 25c each, wool coats, sweaters, boys jackets and other assorted stuff.

If I sold everything I bought Thursday the total would be about $1500. Not bad for $79. But from experience I know I won't sell everything. Just an educated guess and mostly luck.

But then I hit the free bins. Sometimes they are empty and sometimes they look like the city dump. Thursday they held just enough to be interesting. Mainly toys and kitchen stuff and lots of really nasty pillows. Bring out the gloves!! Picked up a big bag of stuff. Mostly transformer, power rangers, bionicles stuff. Boys toys. But some pieces were interesting. Only one bionicle but lots of morphing power rangers that will bring a little something in a lot. And this sad looking leopard kitty that SweetiePie laughed at. 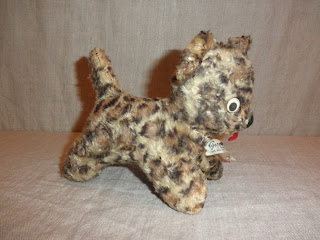 Then I just HAD to go by GW when I went out yesterday to get my hair cut. It is right down the block and I shouldn't waste gas.

I found this wooden dog. From the early 50's. 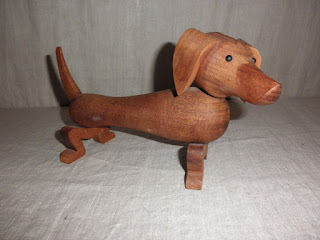 Made of teak. Made in Denmark. Original Kay Bojesen.Score. Check out one just like it here


I had seen these sad looking characters at the TS near where we go for breakfast and couldn't find anything on them when I researched them. Today I just bit the bullet and spent 50c for them. They are not in the best of shape. Dirty, missing a hand and pulled thread in the genuine polyester fabric. But they are my kind of weird. Copyright 1979 Hopeless Concept, named Hopeless People. They do look that way.

It is just my JOB to save the weird.

CHRISTMAS OR NOT .... UGLY IS UGLY

As a former wearer of Ugly Christmas Sweaters I hesitate to call them ugly. Tastefully overdone? Everything but the kitchen sink?

Beauty is in the eye of the beholder, or so it's supposed to be.

I have seen some really unusual sweaters with all sorts of bling on them. Some are sold that way and some are "gussied up" to be really ugly. Imagine my surprise when on my weekly thrifting expedition I found this little 3X gem. 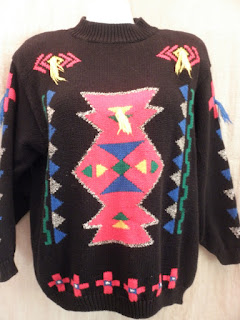 Now, I realize that this is not a Christmas sweater but I think that it ranks right up there on the ugly list because of .... tassels!!

See the tassels? I can imagine the designer saying, "oh my we have yarn left over, let's add tassels to strategic areas of the sweater. One right under each monster shoulder pad would be good. How about another one right here between the boobies. And one on the biceps to highlight those muscles" Oh yes, much better. 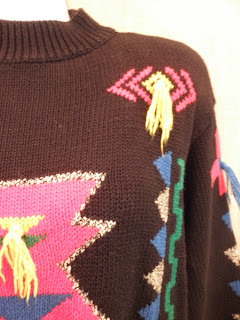 Actually, you could take them off. 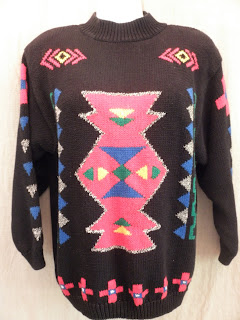 But who would notice?
Posted by annabel52 at 5:00 AM No comments:

But with the increased listings I am getting consistent sales and they are gradually creeping up in numbers and dollar amounts. My goal is a minimum of $100 daily. Since I have been selling full time for just 14 months I feel like this is a reasonable goal. Some days are more than that and some days are a lot less. But the good thing is I have only had one day in the last three weeks with zero sales.

I have been visiting my favorite TS store weekly, except for last week, to keep fresh inventory even though I have a bunch of stuff to list. I am always amazed at the number of great things I find.

I haven't been to an estate sale in a long time and there was one in the next town, 7 miles away. So I just had to go. I should have gone on Friday, but I couldn't drag my lazy butt out of bed early enough to get there. So we went on Saturday. Slim Pickings!!!

I did get some craft things. A couple of patterns, a tatting shuttle, a Beistle turkey, and a handful of knitting patterns along with a couple of knitting books. This one is really weird. No, not the designs, the models showing the different designs. Take a look and I think you'll see why. The photography was done in Switzerland and is from the 60's or early 70's.

SOMETHING LURKING IN THERE ... BOO!!

After a beautiful Saturday with temps in the 70's it has been just plain yucky for the last two days. Rainy and in the 50's.

I was doing my usual thing, listing my ebay stuff when I decided I needed a cup of hot tea to get the chill out. I found this lurking in my vanilla sugar bowl.
I showed it to my SweetiePie and he said, "you have a vivid imagination".
Why, yes I do.
Thank you very much.

Halloween must be on the way. There are monsters lurking everywhere!!
Posted by annabel52 at 12:58 PM No comments:

I COULD HANDLE THIS JOB

Life is frustrating. You have a job that you love and are good at. You lose that job because the economy sucks and you work at a car dealership that sells high end cars that people aren't buying. You go to school and learn a new job. You can't get a job in that field because you are....too old.
I have some jobs that I think, being an OLD person, that I could handle.

This is Fearless (she's not) doing her job. She is a 25 lb+ Norwegian Forest Cat. My guess is that she is guarding the wood that is in the window.
I could do that.
This is her part time job. Her real job is shedding, which she is very, very good at.
This is Simon. He is recharging on the cardboard that is in the middle of the floor. Why? Who knows. But all the cats take turns laying on the piece of cardboard. We should just take it up but it has become a joke. It is their recharging station. Sometimes all three cats will be laying around it and touching it.
What makes it special? Who knows.