We miss you Sheila and Randy

Everyone must move on.

But we really miss Sheila and Randy at our little post office.

Within one week both of the regular counter people were GONE!!! One moved up to a full time job in a larger post office but he had to move to a larger town. The other one retired, a hard earned and well deserved retirement.

But I'm totally selfish. I want them back. Or at least their clones.

It used to be fun to go to the post office every day. But now the postmaster is the counter person and some days we get the temp person who fills in at various post office when vacations and sickness requires extra hands.

What used to take less than 5 minutes, on a really busy day now takes 10-20 minutes.

But Sheila and Randy were a nice part of our day. Always smiling and ready to help. Quick in and out and on with our business.

While I wish them well, I kinda want them back until we get the new people "trained" appropriately.

And from the looks of things that will be a while.
Posted by annabel52 at 5:30 AM 4 comments:

It really does help...Sell Similar!!

There was a discussion over on Scavenger Life recently about refreshing your listings to keep them up in the rankings. It seems that Cassini doesn't like listings that have a lot of views but no purchases. It makes sense that they want to keep things moving and if things aren't selling they aren't very interesting...to Cassini.

I began in late February with any listing that had 100 or more views and were about to renew for another 30 days. I would wait until the day before they were set to renew and end the listing, edit anything that needed changing, like the recent postal rate change, and then do sell similar. I have had 5-6 sales that hit a couple of days after I renewed and refreshed them. And more have had questions and what seems renewed interest. So, while I didn't specifically track any listing, I have seen some results. Didn't keep track of the total but I would guess $100-150 based on my average sale price. Not bad for 2 minutes of work a day.

Recent Finds
I've been trying my best to not go shopping. SweetiePie has been really great about helping when I go shopping but he looks at everything!!! I have certain things I look at in certain stores. For instance I don't look at too many clothes in GW in our area because they are more expensive, just the bins. I go for shoes and household because they are more reasonable. Today I found this primitive cabinet The wood is a little scuffed but not really bad. Each part of the cabinet door is outlined with a routed out border. The stars, moon, tiles on the roof, doors, everything is outlined with a routed border. And a scalloped border all around   the outside edge 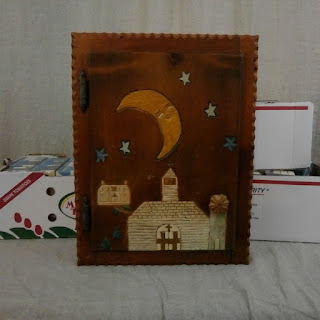 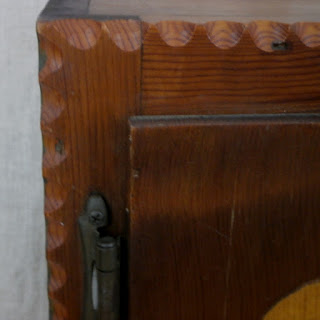 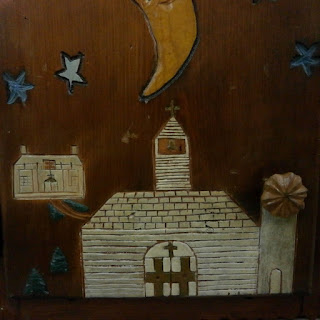 See the plain old wooden knob? That looks like a church? in front but what is that in the back? a hospital, seminary, or what?

I have been on a quest for old slides. I thought I had scored several months ago when I saw a stack of old Kodak carousels in GW but they were all empty. And several more times I have found just the empty carousels. Does GW throw away all of the slides or does the donor keep them? I kinda voting for the family to keep them. Some of the ones I have seen are amazing.

I finally found a few slides. 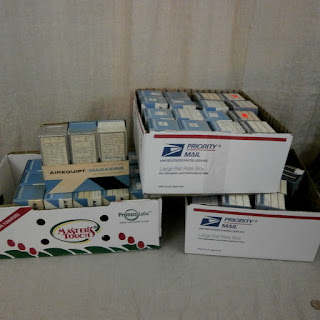 45 boxes with 36 slides each. 1600+ They date from 1961 to 1969. Its interesting that the box on the left with 18 boxes has all of the index cards filled in while after box 18 just a number on the box. I also picked up a projector at the same time for 40% off. The slide boxes were priced at $1 each, but...when I went to check out they were 40% off. Seems that they had been there since 1/24/16. How did I miss them?  I hadn't been to the Habitat ReStore since the first of the year and they were still there waiting for me!!! I just grabbed one of the boxes in the store and look at the caption for this box of slides!! 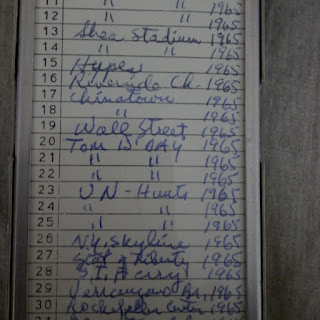 Shea stadium in 1965, Wall Street, NY Skyline, the UN building. I can't wait to look at all of the pictures. I'm sure that some are not appropriate to list but I think I can make my $28 and more.