LOOK IN ALL THE NOOKS AND CRANNIES

SweetiePie is always wondering why it takes me 4 hours in a thrift store. Well, you have to check everything and in every area. You never know what you will find or where you will find it. For example, I found a Brother monogram attachment for any zig zag sewing machine in the game section at my favorite thrift. See, it is in the box with all of the discs for the alphabet and instructions!! 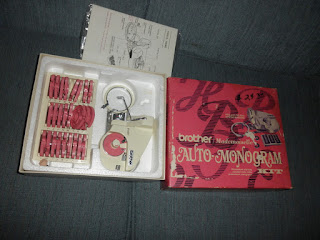 As I was standing there, counting all the discs and looking at the price on the front of the box $24.30, and figuring if I could make a profit. Let's see $24.30 less 50%, and should sell in the $30-40 range, yes that could be triple my investment. Put this baby in the cart. When I got to the check out the man running the register (who just happened to be the store manager) asked what it was. I said a sewing machine attachment for monogramming . He said, "wow, it still has the original price on it". What?? $24.30 is the original price?  What was the thrift store price, you ask? 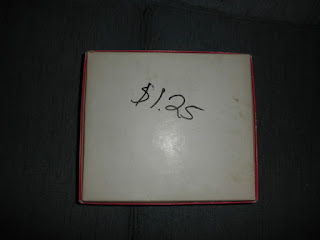 So, the moral of my story is: Leave no item unturned in the store. Look at everything.

Now, if I could just get the darn price off the box I would be one happy thrifter.

**When I got home I checked the completeds and found that this is not a big seller. Maybe $25, but still I'll make a good profit. I would have loved one of these when my girls were little. I'm hoping that some Mom or Grandma will feel the same way. I'm still glad I bought the complete set. It won't sell fast but it should sell for a good profit.
Posted by annabel52 at 8:30 AM No comments:

GETTING THE JOB DONE

My daughter, SmartA**, has settled into her new house pretty well now. And she has unpacked almost all of the boxes that are there. She still has some stuff, not much, that she needs to get from our house. In the meantime we have been working on her kitchen cabinets. I've gotten the frame up and the shelves are in.

And next week we hope to get the vintage windows mounted on the frame. She is going to try and prime the inside this week, if she has time. Not bad for my first set of built in cabinets. You can's see the scuffs on the left wall where we had to "persuade" the frame to fit. If I could correct a few things I would have made the shelves inset in the framework, but at this point we would have to rip out everything to do that. Not gonna happen!!

On the thrifting front I have had some great finds lately. I had a 50% off coupon for my favorite thrift and I have used two of the four I had. I think I will save the others for September when the coupon of the month is any coupon that you have left over from previous months. I will be making an out of town thrift trip in September, but who can resist 50% off!!

I found something I have never seen before and at first thought it had been embellished by the previous owner. But after research I found out it is original. Look what I found! 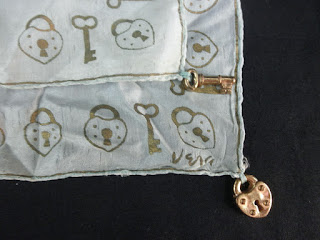 It's a Vintage Vera Charm Scarf. Early 50's. I had never seen one before. According to research they were made from surplus WWII parachute silk. This one has no holes, but does have some color variations, which is normal for the age. But over 60 years old!! I priced high and can always reduce the price, but for the age I think it's fair. Link
Also on the same trip I found a Lilly Pulitzer shift, some JJill linen and silk tops and dresses, several things NWT. The Lilly Pulitzer sold in an hour and half after it listed this morning!!! Lilly
I have been trying to research everything before I list. On the Lilly there is one exactly like the one I sold and it is listed for $54, different size and almost no description. I just checked and it isn't there, must have run out, but in checking completeds it has been relisted at auction twice with no sale.

Also on the same trip I checked an area that I usually just overlook, belts.Usually the belts are pretty beat up and so out of date that I never find anything. There is one time SweetiePie found a Brighton belt, with tags, at GW for $2. I found an Allan Edmonds belt, a per se belt, and this belt that sold last night. You can bet I will check belts from now on.

Happy thrifting and selling.....let the games begin!!!
Posted by annabel52 at 6:00 AM No comments:

I have been selling on ebay for almost two years now and I keep taking crappy pictures. I know, sometimes it is the picture that sells an item. I should do my best to take the best possible pictures. The trouble is that I have had to do it in stages.

At first I was taking pictures in front of my pantry door. It's dark brown wood. But the light was pretty good. Lots of natural light. But I didn't like the door knob in all the pictures!

Then I moved to another room and the light was not as good. So I rigged up a system using reflector lights on some display stands that I had from my craft days. Not too pretty, but they worked fairly well. I always had trouble with reds coming out pink, blacks coming out brown and sometimes all of the colors were yellow. I was using natural light bulbs. A constant struggle and lots of retakes.

I needed a light box for a long time for smalls. I made one from a cardboard box and tissue paper. It was fine for a while. But one of my daughters cats thought it made a pretty good napping box. That didn't last long. So I upgraded to a nylon light box. Wow, what a big difference that made. If you decide to upgrade to a nylon light box, go big. They fold up like those folding laundry bags at the $ store. I got a 24" and sometimes that is not big enough. If you have something large, like cookware, it is hard to get a good shot without getting the sides of the box.

Now I've upgraded to better lighting. At first I was just going to get white nylon umbrellas to diffuse the light. Then I started looking at the stands. They were nice!! You could get the stands, umbrellas and light bulbs for the cost of 4 just plain umbrellas. I ordered the set. The stands adjust up and down and are smaller than the old ones I was using and if I ever need to they fold up for storage. 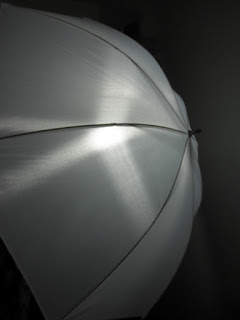 Do yourself a favor, and your pictures, and get a set up with the umbrellas. It diffuses the light really well, the bulbs are florescent, and they are much cooler and more energy efficient. And the colors are much better. Trust me on this one.

One more treat for myself. 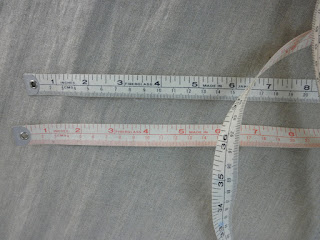 I had been using an IKEA tape measure. You know the paper ones you get free when you go to IKEA? I had taped it back together dozens several times and it was still barely holding on.  I got this really nice one, 60 inches long, in a vintage sewing box I purchased several weeks ago.And I went straight to the trash and threw the IKEA on right in. But it's on top, in case I change my mind ;)

Don't call me selfish. I did it for the good of my ebay store, and ultimately my customers. Plus it makes getting things ready for ebay much easier, and helps me get my listings done faster.

FAIRY DRESSES and other important things

SweetiePie and I were leaving the house the other day and I commented on the demise of our beautiful azaleas in front of the porch. We have huge lavender pink azaleas all along the front of the house. They are George L. Tabor, to be specific. Growing up my Mom loved all things floral and our yard was filled with every sort of azalea, iris, camellia, wisteria, and so many others. And you had to know the correct name of all of them!

Back to the subject.

I commented on the azaleas and said they had been so beautiful that I was sad to see them go but just look at all of the fairy dresses. 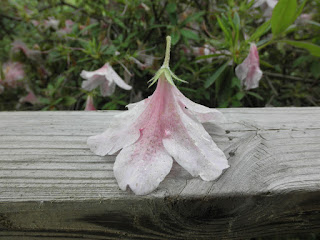 He looked at me like I was from another planet.

He must have left his imagination in his other pants.

Well, maybe I'm glad he skipped that one!!

Things have been really busy around the castle these last few weeks. SmartA** has moved to her new house and I have been rearranging and cleaning and shopping and listing and selling and packing and ......the list goes on. But hopefully I will get organized (like that is possible) and get to share my finds here.

I did get a twin bed (church yard sale) for the little Princess' room with a trundle, so it saves space in the room. Complete with two mattress. $15. I know! They were clean and I am going to put complete covers on them. 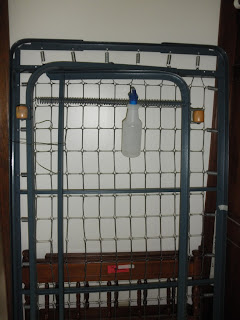 Now to find a queen for the other bedroom and I will be set. Because, as my family knows, I have enough furniture in this house to fill two houses. All I have to do is move it around. (Who needs 6 rocking chairs? Me!!)We were just short of beds. When people move out of our house they take their beds with them.