Yeah I survived the holiday seasons...all except the new year. We'll see about that on Friday.

I did get a tree up this year unlike last year with the boxed fiber optic tree that graced our family room. Ten foot ceilings and a three foot tree do not make a good combination. No matter how high up you put the tree.

This year I did get a small tree up and all aglow before the family decended upon our house. I had motivation to get everything looking festive. Our grandson is in the Army, and for now is still in training, but he already knows he will be stationed overseas in February. And he probably won't be home next Christmas because of the long distance to get back and the expense. So we wanted good memories of this Christmas. Well, every Christmas, but this one especially. So we have been festive until our teeth hurt!! Smile....

You can see I'm off to a great start for the new year with my statements. Now I have to go get my coupons organaized so I can cash in on the last day of the year/month and use those December 50% off coupons. And then I think I need a nap....no more procrastanation for me!!!

My daughter and I were exploring the bag sale yesterday and I found two pair of jeans and some t shirts for my princess grand daughters. I had sorted them out to wash and left them on the floor. This morning I noticed our cat had claimed a pair and was sleeping on them.  When I went to get my camera she went nuts....a very short trip for her. 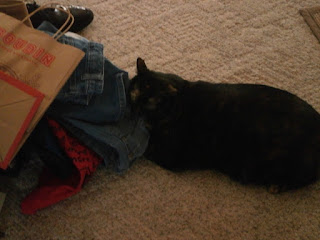 She was just napping on the bottom pair until I got the camera. Then she decided to explore the other pair. 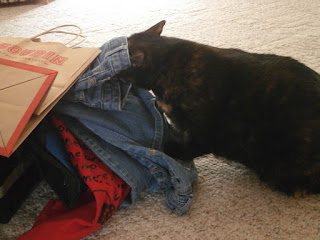 Ummm...what is that wonderful smell? 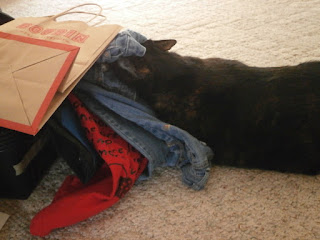 Essence of Thrift Store?  Love it. Really, really love it. 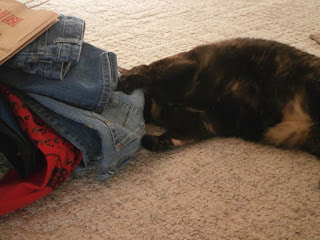 I love it so much it needs a hug.

Where do the numbers come from?

We have a saying here in the South. When you don't want to hurt someone's feelings you just say "bless their hearts". A way to be polite and not offend.

Now I will be laughing for a week.

They raised my selling limits to $2,932,819.78. That's over 75 times what I have listed at this very minute. Where do the numbers come from? Random generated numbers? A dart board in the break room?

Way back when I was a newbie seller there were no limits. They just wanted you to list your stuff because everything sold and they wanted those fees. Now everything is regulated and I feel for new ebay sellers when they have to beg ebay to raise their limits. But these numbers are so totally out of reach that it's funny.