We were all celebrating the grandsons birthday last week with a bit of nostalgia since he is joining the Army after graduation in June.  January and February is birthday central in our family. Three in January, six in February with Valentines thrown in for good measure. Grandson starts off the chain and then our youngest daughter, SmartA**.

Oldest daughter and I wanted to take SmartA**out for lunch this Saturday and maybe do something together. So we asked what she would really like to do. Guess what she said? Go thrifting!!! Not a problem. Now, oldest daughter is not a thrifter. She is more of a Target/Kohls kinda girl. Which is fine (not really....retail?) if that's how she flies. But we are all planning a thrift trip. SmartA** wants to go to the big thrift with the 25c bins and 99c racks and free bins. An adventure......and time together. And we will find some good things along the way.

I have been trying to cash in on the big donation surge at the end of the year. Also, the big thrift has calendars ($1) that they sell at the end of the year with coupons for each month. January's coupon is 50% off of your entire purchase between the hours of 8am and 10am. I purchased 2 calendars before the end of the year and received 2 free ones on my first visit in January. Yeah...one coupon a week for each month all year long and they only cost (lets do the math) an average of 25c per calendar divided by 12 months...so that makes each coupon cost just over 2c. I think I can live with those numbers.

I've been twice and gotten a few things.  Seems like sheets have been a good thing in the bins lately. 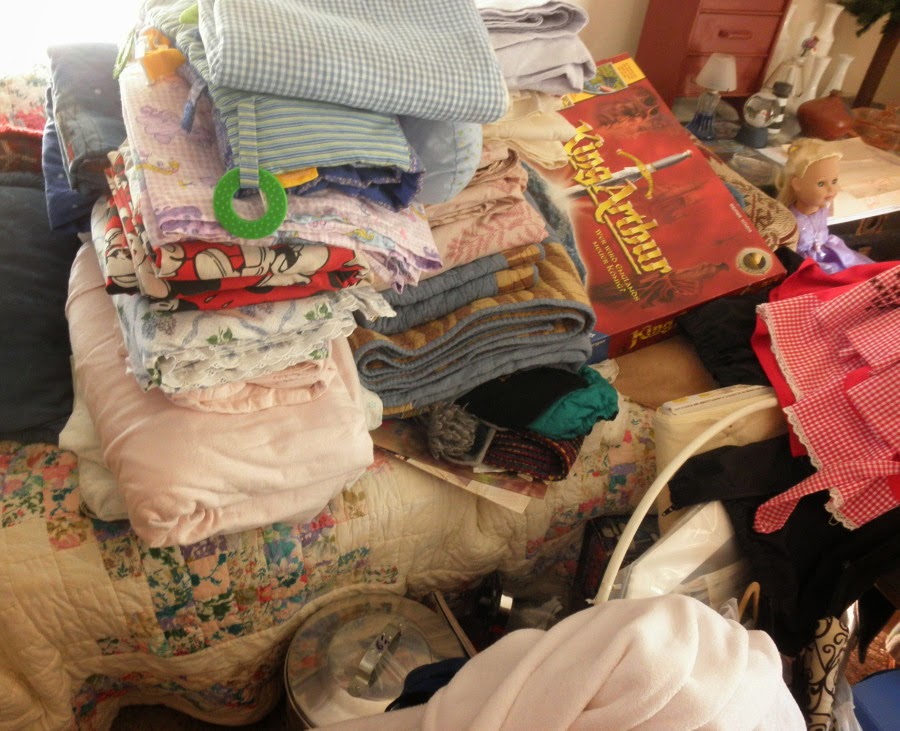 This pile is big. The pile on the left is two deep with sheets and the pile on the right is a king size duvet cover with shams, a twin size duvet cover with shams, a full size sheet set with quilt and shams to match, plus a bunch of sheets, a Xstitch crib quilt, talking King Arthur game(in German). Also two handmade gingham aprons, one with chicken scratch and one a vintage border print. Ivory single edge eyelet fabric, 6.5 yards on the bolt, and a new IKEA mosquito net for a bed. Housewares include a stacking Regal food carrier, coffee carafe, 3 espresso carafe, Super Shooter, glass microwave replacement, vtg Pyrex Kitchen Aid mixing bowl, and a dozen assorted kitchen gadgets. 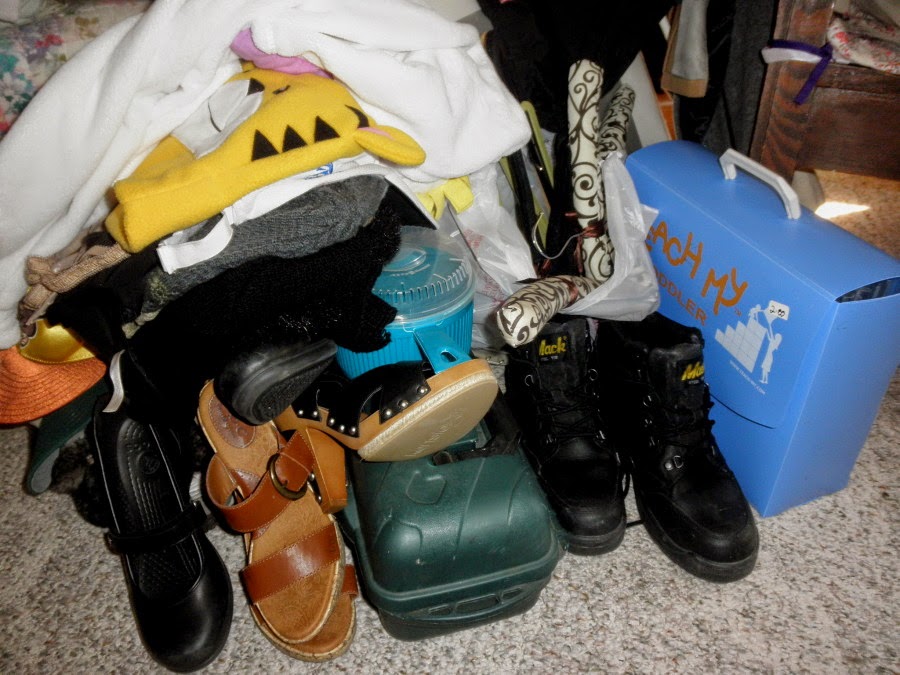 The two pair of sandals are new, boots, crocs leather shoes (didn't know they made leather shoes), Teach My Toddler complete set, some wool hats, ball caps, Art Bin tackle box, a unicorn cuddleuppet, and hangers for all of the stuff .

What I forgot to take a pic of is a pile of coats that I got on my first trip. A Sir Pendleton men's top coat, a Banana Republic wool cashmere jacket and several windbreakers. And a whole bunch of free stuff.  Two vintage thermos, knitting looms and some loose toys.

So what am I doing on this blog? I need to get my self in gear and get some things photographed and listed, especially the coats. I have a thrifting date on Saturday.